The Red Kingdom is predominantly Oriental and Asian influenced. The kingdom is basically ruled by a clan which is the noble main bloodline of the kingdom. The Main bloodline Head is the leader more commonly known as the emperor or empress, who have retainers which are the extended family. There are ninjas and samurais in this kingdom rather than normal soldiers.
Oni make a contract with the summoner to be forever loyal to the blood of their master who summoned them, and thus it is extremely rare for an oni to ever turn on its master. 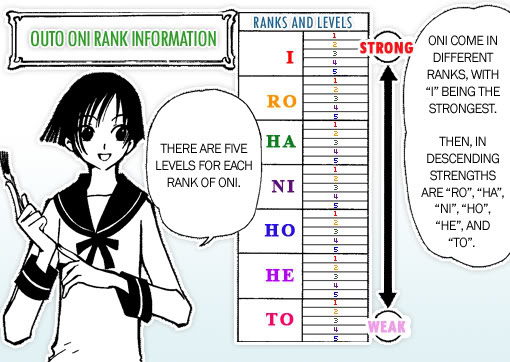 Most children are tutored by personal teachers. Summoning oni is not something that can be taught easily to multiple individuals at the same time as it involves discipline and self-harm that can vary from individual to individual. Also depending on the family, some teachers teach combat abilities. Others may only teach necessary summoning basics.

Many fighters become either Samurai or Ninja based on their family background and skills. Samurai were usually noblemen who became soldiers who served the Emperor. Ninja on the other hand are mercenaries, bought for their services.